At the request of my students, I am starting this blog with the vocabulary. Take a minute and review the definitions and idioms below before reading Chapter 2: Meet Larry. The idioms are indicated with an *.

Take a minute and review the definitions and idioms below before reading Chapter 2: Meet Larry. The idioms are indicated with an *.

Read the paragraph below with the new vocabulary that you’ve learned.

Lazy Loafing Larry likes a laidback lifestyle. His devil-may-care attitude often causes him to malinger. Rather than entering the competitive modern melee of the working man, Larry prefers to mull over the meaning of life and unmask the secrets to success while styling his high-end pompadour. While his tenebrous work ethic drives some people away from his erratic fidelity to outlandish habits, his higgledy-piggledy jocund personality can weld together the already buddy-buddy crowd. They, with a show of altruism, often give Larry a salutary subvention and further quicken his rather destitute yet oneiric existence. Thus, Larry lives a life of leisure. 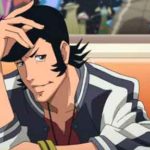 How much did you understand?

What kind of person is Larry? What are some of his characteristics? Would you want to be his friend? His boss? Why or why not?

Now would be a good time to rewrite the paragraph using the new vocabulary definitions. In class last week, I had my students do it. Do you want to try yourself?

If not,  here’s my revised version.

Lazy Loafing Larry likes a relaxed lifestyle. His unworried attitude often causes him to avoid working. Rather than entering the competitive modern fight of the working man, Larry prefers to think about his reason for existence and discover secrets to success while styling his expensive hair style.  His obscure work ethic drives some people away from his inconsistent faithfulness to unusual habits; his unordered lively personality can bind together the already friendly crowd. They, with a show of helpfulness, often give Larry a beneficial financial support and further reinforce his rather poor yet dreamy existence. Thus, Larry lives a work free life.

Vocab matters! These paragraphs are obviously particularly dense, but the principles we are learning are the same whether i every other word or only one or two words is confusing.

With time and practice, your vocabulary can be improved!